Our inspiration is an amazing young lady -- Lexie. Pictured here in 2006 after throwing out the first pitch with Coach Lonny Sargent, catcher Sara Fleming and pitcher Leslie Higley. 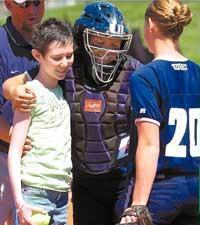 Below is an article originally published by the Herald Journal in Logan, Utah and written by Clay Moffitt. Clay was the sports writer assigned to the softball team that year. His article captures the true essence of why we coach, why we have started the Softball Cares and the power of the game to lift the spirit.

Redefining what success is

Ultimately what determines success in sports? How can a coach with a 7-36 record say his team is a success?

It’s obviously not the team’s record that USU head softball coach Lonny Sargent is proud of, but he has the bigger picture in mind when he gloats about his players’ success this season.

“It’s been tough, frustrating,” Sargent said. “But a lot of good has come from it. And I don’t think people

know how much good has actually come from this year."

That may come across as just a coach trying to put a positive spin on a disappointing season, but don’t let Lexie Haslem hear you say that.

Lexie, a Vernal native, has attended the USU softball camp ever since she was nine years old, but that streak was in jeopardy when she was diagnosed with cancer last year at the age of 11.

In January of 2006 when time came around for the team’s camp, her mother Lori brought her younger sister Jaden to the camp, but one of the volunteer assistants, Erin McDonough, noticed Lexie wasn’t there and Lori was visibly upset. Lori explained Lexie was at Primary Children’s Hospital for treatment, and that was the first time Sargent found out about Lexie’s condition.

But Sargent wasn’t about to let Lexie miss out on camp, so he suggested he would see if he could find a few players who weren’t busy to go visit her in the hospital.

“Coach just said anyone who wants to go can go,” Aggie catcher Sara Fleming said. “Our team has always stuck together in anything we want to do, and we decided to go as a team.”

In the sports media, adjectives like valiant and heroic are used too commonly, but when used, they should be reserved for special occasions such as this — when something genuine and meaningful actually happens.

The Aggie players gained more from seeing the tears of joy on Lexie’s face more than they ever could from a come-from-behind victory, conference championship or individual honor.

“It was awesome, it brought all of us to tears as well as her, just because you could tell how happy she was that we were there to support her, and we knew she would be able to get through it,” shortstop Quela Leonhardt said.

Doctors tell Lexie she has about a 70 percent chance of completely recovering, and they are unsure if she will be able to ever play softball again, but Lexie has a different scale she operates on.

“Oh yeah, I will be, but I mean hopefully soon, like in the near future,” Lexie said with the emphasis on the latter part. “But I will be playing softball again.”

Sargent kept in contact after that visit with Lexie and her mother to help lift Lexie’s spirits and provide her with encouragement, and her mother said the players love being involved with those calls too.

On Saturday, the Aggies were happy to see she appeared to be headed in the right direction, when she came to the game against New Mexico State and threw out the first pitch for Senior Day.

She’s come a long way, but the road will still be long for Lexie. However, having support to keep her focused on her goals has helped her through the process.

“I’ve learned a lot from this,” Lexie said. “I’ve got a lot of determination, and I’m going to have to work hard to get back to where I was.”

But by the tears they shared with her, it’s evident the Aggies received more by seeing her example and what she’s had to overcome, than they could give her.

“We should all just be thankful that we’re able to come out here and play,” Leonhardt said. “She’s struggling through something bigger than just playing softball.”

Sargent said all he wanted to do with this experience was teach his players to have respect for life and enjoy what the opportunities they have. And what better success can a coach and a team have?

A Note from Lexie's Mom

Hi Lonny and Erin. It's me Lori, Lexie's Mom. I just checked out the website, I am trying to wipe my eyes dry enough to read my screen. My heart is so full I truly don't know where to start. You guys are so awesome! It would be the biggest wish of my heart that others could be touched by your giving spirits the way Lexie has. You guys have made such a difference in her life.

In January when Lexie was hospitalized she had hit an all time low. Her spirit was crushed by the devastating news of her bone damage and the deadly bacteria that was taking over her body. The visit from the team still to this day brings a smile to Lexie's face. She proudly shares the experience every chance she gets. Lexie will hold all of you dear to her heart the rest of her life and so will I.

I plan to spread the news about this wonderful organization. The Vernal Crushers Softball team loves to paint on our car windshields as we travel to tournaments. Our car was plastered with #3 Jadie, lets win!, Vernal Crushers, softballcares.org, Lexie lulu #5. Please let us know if there is anyway we can help with this cause. If we can we would love to help.

Thank you so much for your love and compassion for Lexie. She is so blessed to have such great people care about her. Just when Lexie thinks she can't handle anymore God sends angels like each of you her way to help lift her up and tackle another day.